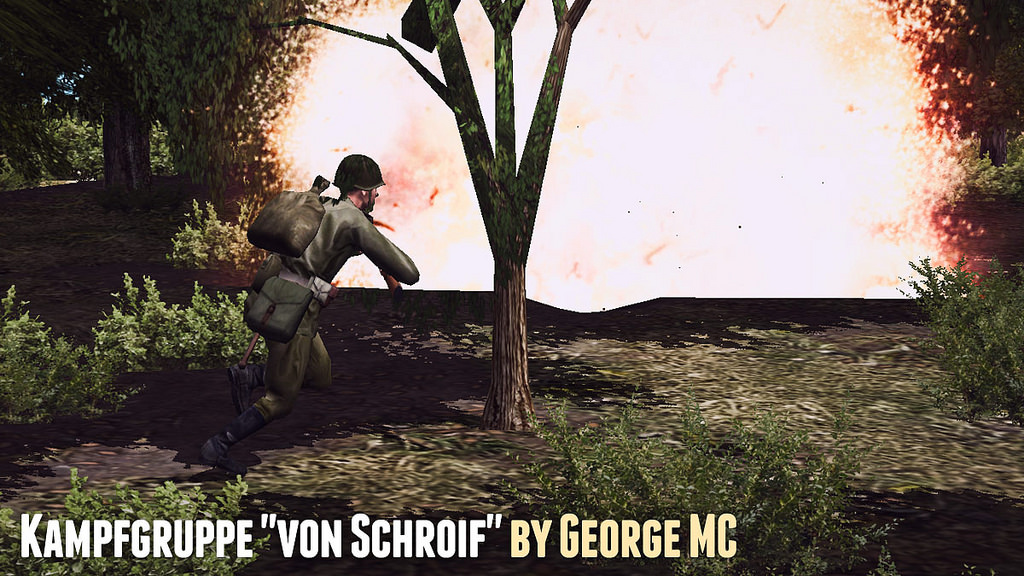 WHAT VERSION OF COMBAT MISSION IS THE FILE FOR? *

WHAT IS THE SCENARIO / MAP TITLE? *

DOES THE SCENARIO / MAP REQUIRE BATTLEFRONT DLC OR MODS? *

WHAT SIZE IS THE BATTLE? *

WHAT ARE THE MAP DIMESIONS? *

Largest map is around 2.5km square

WHAT TYPE OF BATTLE IS THIS? *

WHAT IS THE LENGTH OF THE SCENARIO? *

WHERE IS THE SCENARIO / MAP BASED? *

WHEN IS THE SCENARIO BASED? *

WHAT TIME OF DAY IS THE SCENARIO BASED? *

WHAT IS THE WEATHER IN THE SCENARIO? *

NATIONALITY OF SIDE ONE *

NATIONALITY OF SIDE TWO *

THIS SCENARIO IS BEST PLAYED AS… *

This mission pack contains all the missions that when compiled made up the CMRT campaign KGr von Schroif. I’ve released them as individual missions which whilst you can play them separately do link one into the other. Obviously things such as casualties etc don’t carry over so you will find some of the latter missions (which assume a depleted KGr von Schroif due to earlier actions) are easier than they would be if you were playing them as part of the CMRT campaign e,g, due to no re-supply issues, core unit not carrying over casualties from previous actions etc.

I should also stress there are no Soviet briefings included in any of the missions and there are no German AI Plans so these missions are ONLY playable as Germans vs Soviet AI.

The briefings take the form of an immersive narrative. Therefore they tend to be fairly lengthy, Not everyone’s cup of tea but I like that. To help process the info I compiled all the campaign briefings into a PDF file titled Kampfgruppe von Schroif Campaign Briefing Handbook. Each brief is linked via the Campaign Flowchart so you can quickly access the briefing you want. If you don’t like reading then the Operation and Tactical Maps in each mission provide the key info required at a glance.

There is also a table showing your unit, its commanders and their ‘soft’ values e.g. experience, morale etc. In addition there are Force Tracker graphics which allow you to track casualties and effectiveness of your unit as the campaign rolls on.

In addition there is a pack of Tactical Maps included in the zip file. These are maps of all the main missions and are blank unannotated JPGs. They offer the player the ability to use them to plan their actions either on paper (print them out) or digitally on your PC/Laptop.

There are no mods required to play this campaign. It’s playable “out of the box” using the base CMRT game. If you are interested in what mods I use (and you’ll see in the screenshots) then I use the following:

Aris’ vehicles (both German and Soviet)

Tanks a Lot buildings (these just add more ‘skin’ options for buildings but they are great!)

Rambler’s CMBS Trees and Hedges (yup CMBS mod but it works in CMRT).

Huge shout out to SeinfeldRules for the kind permission to use his “Assault Position” scenario.

Special mention goes to Combatintman who painstakingly proof read and checked all the briefings for every scenario and their associated tactical and operation maps. I think the words Oberleutant and Oberstleutnant will be forever etched in his brain! He also provided the “Force Tracker” graphics.

Any subsequent errors, omissions and weirdness are entirely my fault!

Any feedback etc please don’t hesitate to contact me at georgemc@blowtorchscenarios.com or via the Battlefront.com forum my ‘nick’ is George MC.

For info about the development of this campaign you can check out the thread below: