Good ol’ mTk, always adding to our good humor, multiplying our mirth, squaring up our merriment, clearly a mirth master in his prime amongst our number. Always as funny as a pi to the face.

I was digging in my garden when I found some gold coins.
I got so excited I ran to the house to tell the prostitute about it,
but then I remembered why I was digging.
-----
God: Creates a worm. Hello little buddy.
Worm: Thanks for the worm welcome. Ha, ha!
God: Creates birds.
-----

On average it costs over $235,000 to raise a child today and...that's just for the alcohol.
-----
Therapist: So, what brought you two here?
Woman: I just hate how he takes everything so literally.
Therapist: What about you?
Man: A truck.
-----
Today I went for a walk with a beautiful girl.
Then she noticed me so we went for a run.
-----
Dating apps? No thanks.
If I wanted to talk to someone for hours and accomplish nothing, I'd contact tech support.

If anyone has the right to be mad at Harry and Meghan it's the people of Sussex, who have been left leaderless without their Duke
and who are now defenseless against incursions from Hampshire and Kent!

mTk said:
If anyone has the right to be mad at Harry and Meghan it's the people of Sussex, who have been left leaderless without their Duke
and who are now defenseless against incursions from Hampshire and Kent!
Click to expand...

Ye this could be a rising amongst the Counties my Lord

Sometimes you meet someone and you know from the first
moment that you want to spend your whole life without them.
-----
Who knew that the most taxing part of being an adult is trying to figure out
what the f*** to have for dinner every goddamn night until you die?
-----
If you lie down on the floor in McDonald's you get to meet the manager.
-----
Kids advice on marriage:
How would you make a marriage work?
"Tell your wife she looks pretty, even if she looks like a dump truck."
Last edited: Jan 19, 2020

I think this belongs here....

If you don't get it it's because there's no punchline. 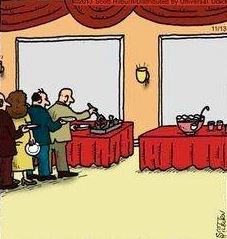 Me: I trained this chicken to talk.
Her: Let's see.
Me: What's a male deer"
Chicken: Buck.
Me: How much is 200 pennies?
Chicken: Buck, buck.
Her: This sucks.
Me: It gets better.
Chicken: It gets way better, Karen.
-----
There was an old man who lived by a forest.
As he grew older and older, he started losing his hair, until one day, on his deathbed, he was completely bald. On that day he called his children to a meeting.
He said, "Look at my hair. It used to be so magnificent, but it's completely gone now. My hair can't be saved, but look outside at the forest. It's such a lovely forest with so many trees. Sooner or later they'll all be cut down and this forest will look as bald as my head."
"What I want you to do," the man continued, "is every time a tree is cut down or dies, plant a new one in my memory. Tell your descendants to do the same. It shall be our family's duty to keep this forest strong."
So they did. Each time the forest lost a tree the children replanted one, and so did their children , and their children after them.
And for centuries the forest remained as lush and pretty as it once was. All because of one man and his re-seeding heirline.
-----
{giggle}
Last edited: Jan 28, 2020

My husband and I decided we don't want to have children.
We will be telling them tonight.
-----
Of the terrible ways to be woken up I think "Mommy, my fart is on the floor," takes the cake.
-----
Me: Spends time picking out stuffed animals I think my daughter will love and get attached to.
My Daughter: Sleeps with and carries around a lemon.
-----
Loud crash from another room.
Toddler: NOTHING!
-----
I accidentally flushed the toilet instead of letting my kid do it.
In the toddler community this is a crime punishable by death.

One thing no one ever talks about as an adult is how much time you debate with yourself
on keeping a cardboard box because it's, like, a really good box.
-----
Turn your ordinary sofa into a sofa bed simply by forgetting your wife's birthday.
-----
You ever have a poop so big it kinda feels gay?
Last edited: Feb 5, 2020

mTk said:
Turn your ordinary sofa into a sofa bed simply by forgetting your wife's birthday.
Click to expand...

What do you call a gorilla with a machine gun.....
Anything he bloody wants you to call him!!

I found out why they put bells on cows.
It's because their horns don't work.

I stayed up all night to see where the Sun went and then it dawned on me.

HOA_KSOP said:
I stayed up all night to see where the Sun went and then it dawned on me.
Click to expand...

If you slap Dwayne Johnson's ass, you're hitting rock bottom.
-----
Thanks to modern engineering it is now possible
for a husband to buy the wrong flavored trash bags.

I like the one about the trash bags.
Recently I bought the wrong "scented" ones.