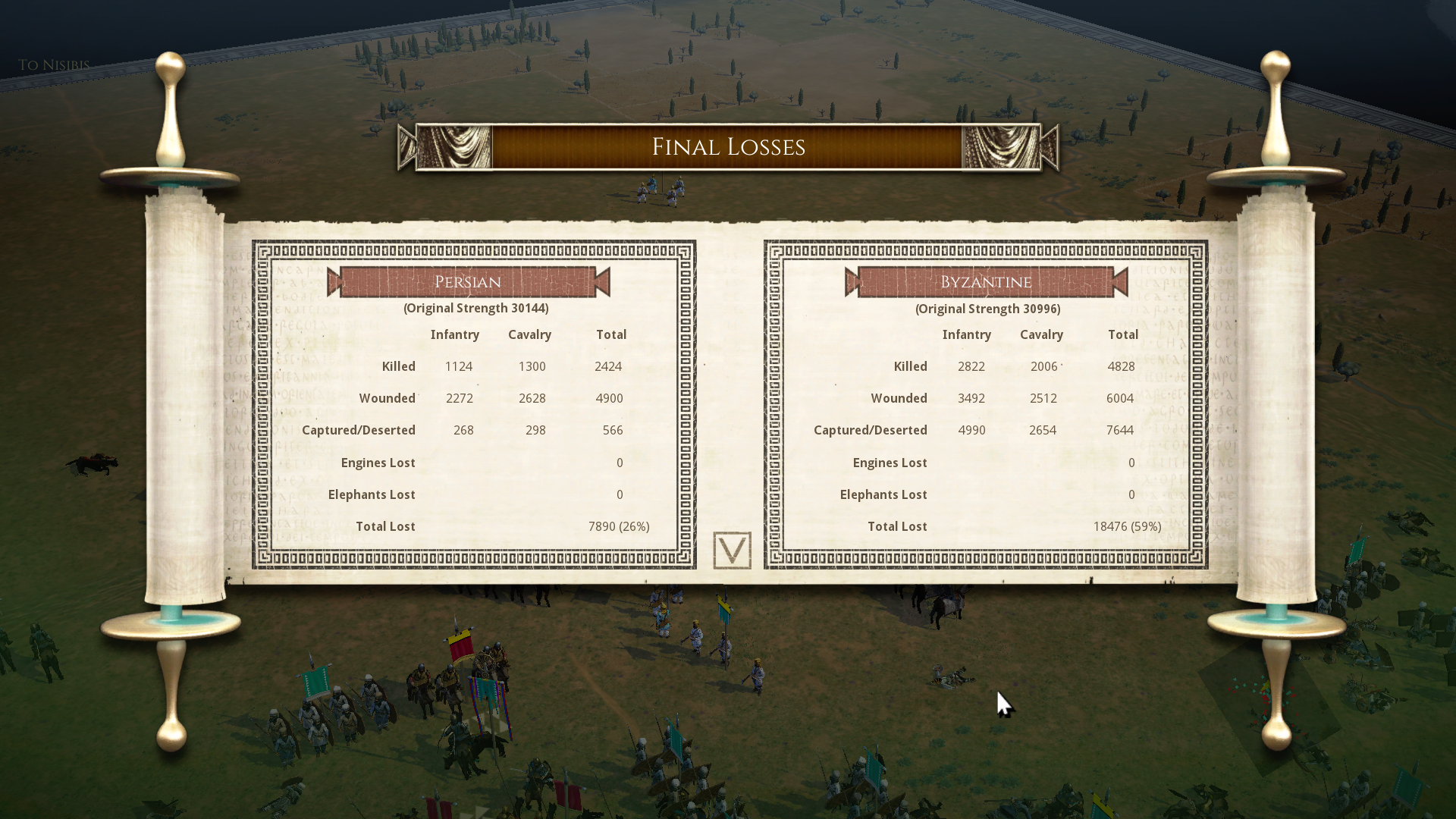 @olaf has beaten me. 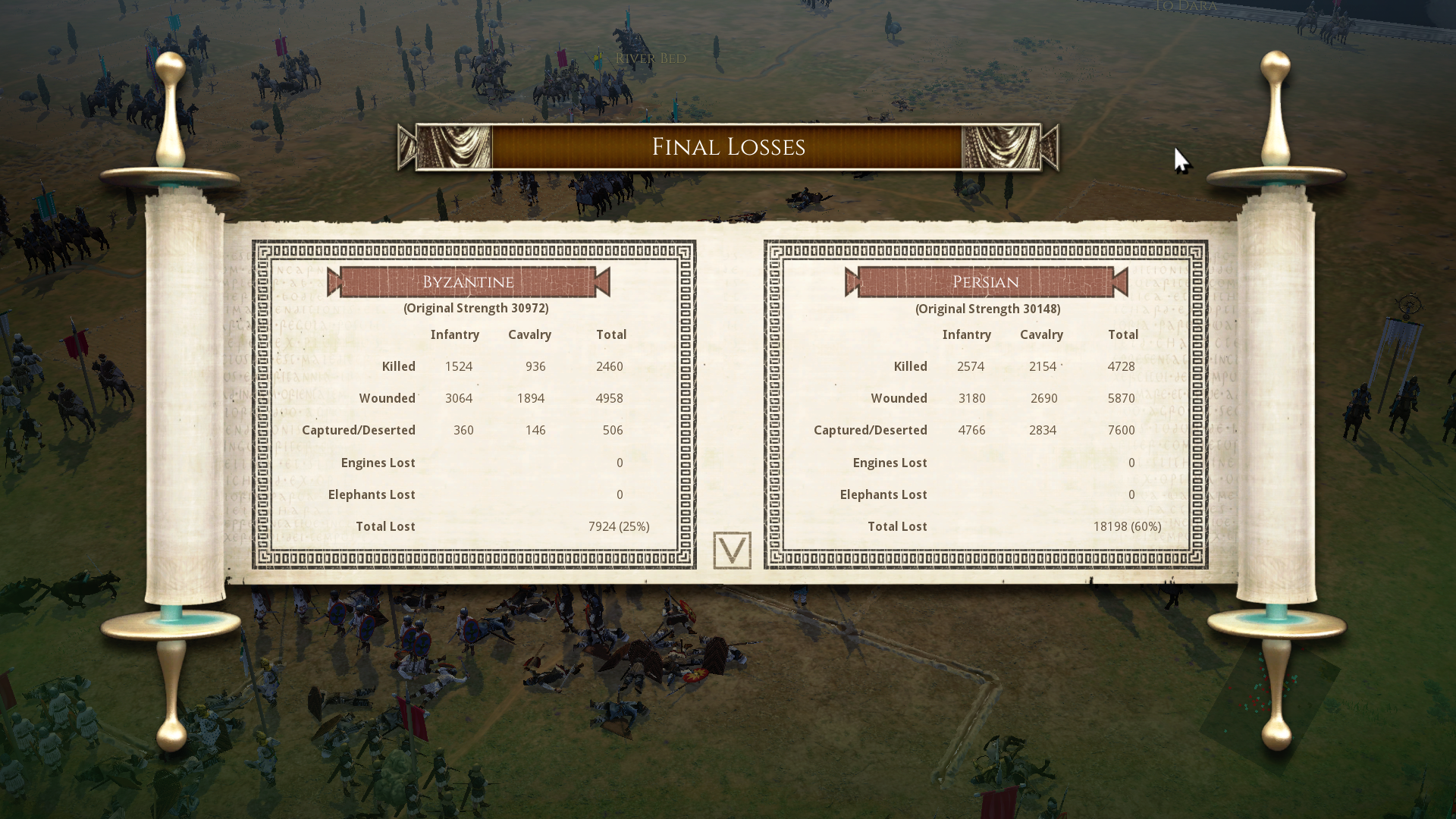 Wellsonian said:
That is better for me, but......
I know it says that in that screen, but in the upper left corner it says 40-61, and the game won’t end until you have over 60% broken. Not sure which one we use.
Click to expand...

Always use the upper left hand numbers, wich are displayed the whole time.
The "Final Losses" screen is really just there for the flavour and does not represent the real battle performance - it is skewed very much in favour of the winning side.

@Nelson1812
I thought it was made quite clear which numbers to use, otherwise a ranking wouldn't make much sense.

I have only reported the upper left numbers the entire time.
J

We want to be reporting the red and green routing percentages not the Final Losses percentages.
J

Nathangun said:
@olaf has beaten me.

Well done @olaf ! I think that is the first win for the Byzantines.

Based on how my two games are looking so far and from the previous posted results this one looks to be trending contrary to the historical outcome.

Those Immortal Cataphracts are an unstoppable freight train

Jolly Olly said:
Well done @olaf ! I think that is the first win for the Byzantines.

Based on how my two games are looking so far and from the previous posted results this one looks to be trending contrary to the historical outcome.
Click to expand...

Thanks! It seems like in the historical battle the byzantines won the left flank because the persians got ambushed. That would not really happen in a FOG battle so I had to use a different way. Somehow I had to make my way to the persian infantry to make a difference, and without the superior persian cav being in the way. It worked in the end.

Another victory for the Persians ... win for me against @Mad Mike 41% to 16% ... the infantry hardly featured in this battle

Belisarius speaking to the troops:

"You know assuredly that the Persians are not altogether invincible, nor too strong to be killed, having taken their measure in the previous battle; and that, although superior to them in bravery and in strength of body, you were defeated only by reason of being rather heedless of your officers, no one can deny.

This thing you now have the opportunity to set right with no trouble. For while the adversities of fortune are by no means such as to be set right by an effort, reason may easily become for a man a physician for the ills caused by himself. If therefore you are willing to give heed to the orders given, you will straightway win for yourselves the superiority in battle. For the Persians come against us basing their confidence on nothing else than our disorder. But this time also they will be disappointed in this hope, and will depart just as in the previous encounter.

And as for the great numbers of the enemy, by which more than anything else they inspire fear, it is right for you to despise them. For their whole infantry is nothing more than a crowd of pitiable peasants who come into battle for no other purpose than to dig through walls and to despoil the slain and in general to serve the soldiers. For this reason they have no weapons at all with which they might trouble their opponents, and they only hold before themselves those enormous shields in order that they may not possibly be hit by the enemy. Therefore if you shew yourselves brave men in this struggle, you will not only conquer the Persians for the present, but you will also punish them for their folly, so that they will never again make an expedition into the Roman territory."
J

Well, chalk another one up for the Persians in this one. Mine have managed to overcome Rico's Byzantine forces 8% vs 43%. The Persian cavalry is pretty darn tough. This one was pretty much all won by the mounted troops.

Thanks for the game Rico! I look forward to the next one!

Nah. I've still got a game going with @mTk . Not sure if there are others or not myself.

Both my games (@poesel71 and @mTk) are still in process. Many funerary Masses will be sung when we're done . . . :shootero:

Will try to pick up the pace.

Hi Everyone... this is a monthly game, next round will not start until around 1st July. Will start gathering the scores in the next few days.

@olaf please confirm the score @Nathangun
I need the percentage gain/Loss on the last battle page.... those in red and green … thanks.

Please confirm those against @poesel71 just in case you have recorded the wrong scores. 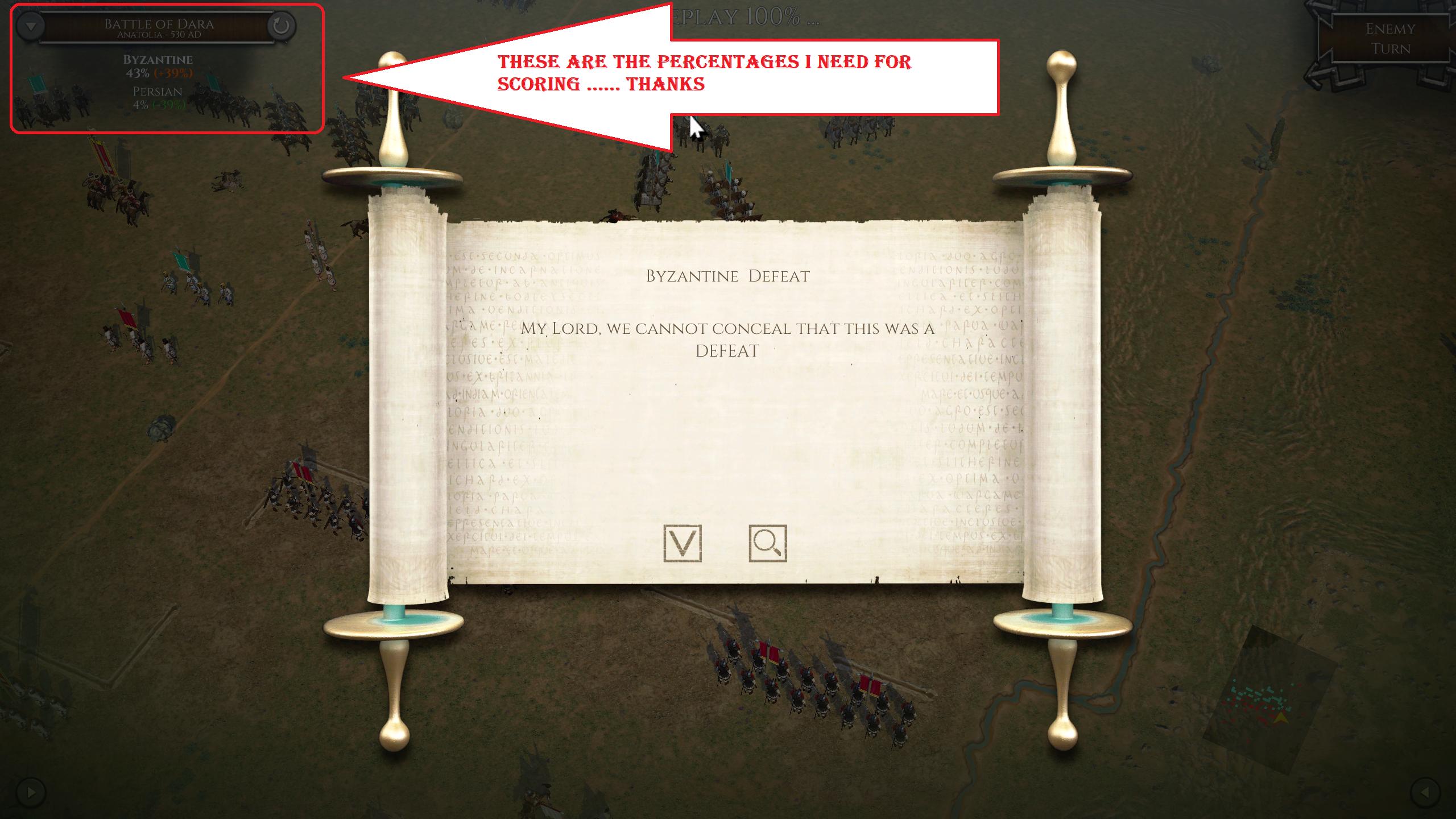 My game vs @Badger73 has ended. We tried to massacre as many of our troops as we could and I think we did fairly well. 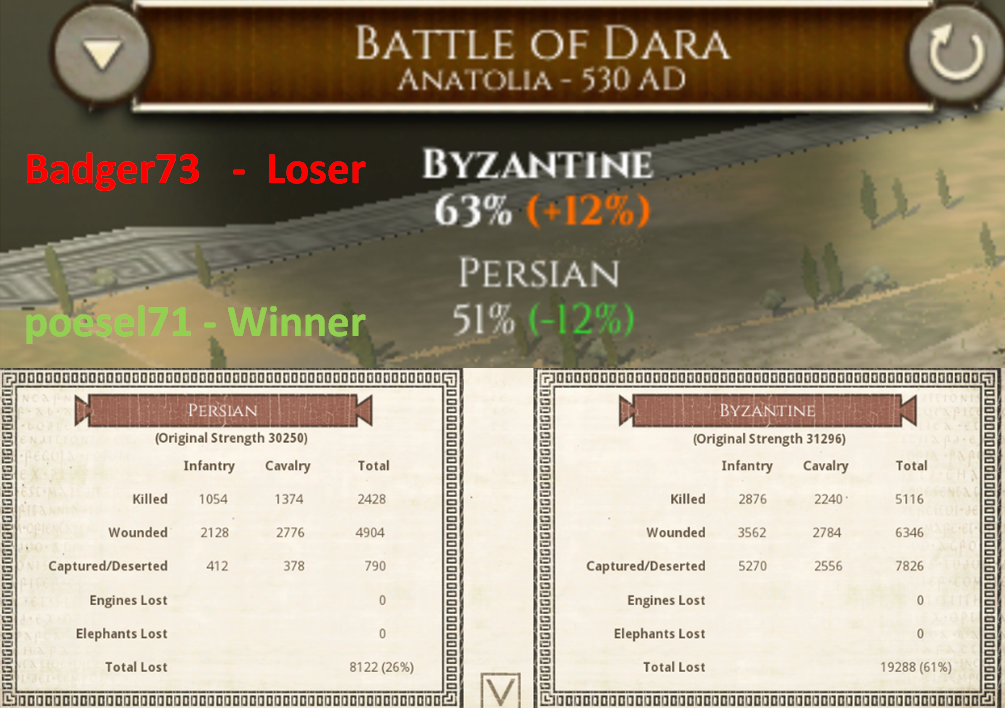